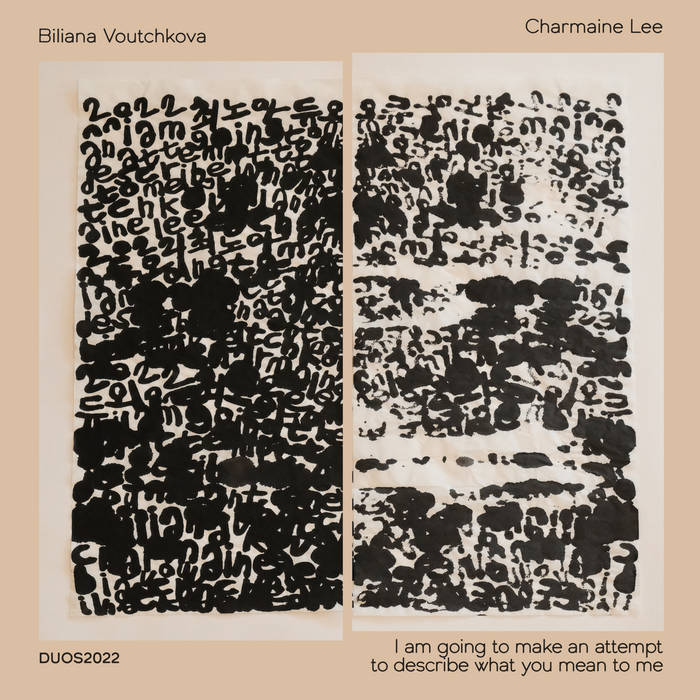 This is the seventh and final in a series of digital releases featuring violinist Biliana Voutchkova. Biliana describes the series as follows.
I've started the year with a good deal of inspiration for this new project - DUOS2022. As can be gathered from its title, it’s an year long project, a continuation and development of my curated live concert series in Berlin which started as DUOS2020/2021.
More information:
www.bilianavoutchkova.net/duos.html

This album was conceived and developed via exchange of images and sound files from a distance. Charmaine and I responded to each other's imaginations, drawing upon our personal senses in the comforts of our own homes. I associate it with something intimate, familiar, with worlds of dreams, fantasies and parallel realities which merge into one another in the virtual space of creation somewhere between Paris, Berlin and New York. All the short spoken haiku-like poems which became the track titles are coming from messages and actual dreams I often record on my phone in the state of pre-sleep or just-awake. The commissioned cover art is entirely created with words related to the album. Noah, who is a young Korean artist living in Seoul, is joining this fantasy journey in his own way, expanding and connecting us to one more place, one more personal universe on our globe. Distance becomes irrelevant, the division between dreams and reality disappears, through sound, words and visions we are "always in close proximity, long time closeness."

Recorded by Charmaine and Biliana in their current homes in 2022
Edited and mixed by Biliana Voutchkova at the Cité Internationale des Arts residency in Paris, with thanks to them and the Berliner Senate
Mastered by Weasel Walter
Original cover art by Noah Kae Choi, commissioned for the release by Relative Pitch Records and Biliana Voutchkova

If you like I am going to make an attempt to describe what you mean to me, you may also like:

The Hammer and The Relentless from the Boston band Malleus stop by for a chat.